A curated exhibition of video work exposing different aspects of our interconnection with ‘Nature’.
Featuring: 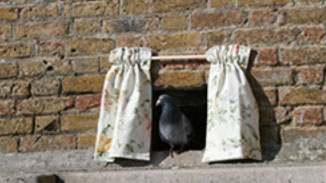 The new enemy at the Redoubt is a colony of pigeons who take every opportunity to invade and occupy the open ventilation shafts of the building’s original structure, but I was interested in the part played by pigeons in war time. A little research about carrier pigeons led me to the PDSA’s Dickin Medal, “awarded to animals displaying conspicuous gallantry or devotion to duty” and awarded to 32 World War II pigeons who between them saved hundreds of lives. How ironic that these “brave” pigeons (possibly ancestors of the unwelcome squatters at the Redoubt), were considered heroes while actually simply following their natural instincts to fly home at any cost. 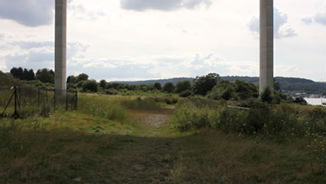 in Kent, by the strange Jezreelite sect; and another monumental structure: the motorway bridge across the River Medway at Rochester, beneath which, the stones of the demolished Temple now lay, is explored. Once a dominating presence in the landscape, the temple and any significant traces of the sect have been erased.

'Von Uexküll (Odradek)' is built around an attempt at communication. 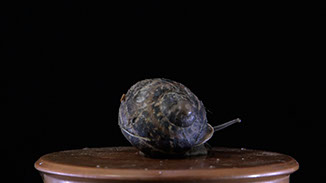 Neither character becomes the dominant force – a metaphysical duel ensues.

The piece creates an intimate apprehension that builds tension and anticipation. However the climax may never come. 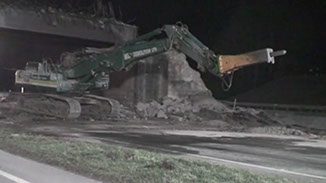 to spend the night filming on a bridge demolition site on the A1 motorway. When I arrived to Darlington station, I had to take a bus to the edge of town where I met the job site manager. He picked me and we drove to the job site. He was surprised I had met him on my own. When we arrived,  I was given  a safety brief and reflective clothing to wear, the size they gave me didn’t fit so I had to adapt it with a belt. We drove the motorway bridges that were being demolished around 6pm, just before sunset. When the sun went down the work began, the low frequency sound was as physical as the work taking place, I was observing a labour that often goes unseen.

Same Colour as the Carpet

An overheard pub story becomes a script for a voice actor. 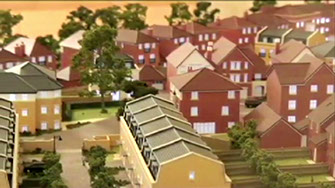 The story is fragmented and kaleidoscopic. Meanings emerge. The image follows the sound. A suburban drinking hole, a children’s play area, traffic, utopian cross stitch embroidery. It’s all burning. It’s the end of a dream and the beginning of an hallucination.
Credit: voice over artist – Robin Bale.

Acknowledgements: Big thanks to Ed Davidson-Bowman for expertly putting together the showreel for this exhibition (edbpro.co.uk and www.facebook.com/EDBPro)